Off-topic: We get it, Miley!

Sorry to waste my ham radio aficionados' time, but I've been wanting to say this for a while now:

WE GET IT! Okay? We realize you're not 15 years old anymore. We get it that you don't have that cheerful Disney attitude to your demeanor anymore, that you're not all fresh and pure as the wind-driven snow, and that you're not the same girl MY kids grew up with.

We get that you don't want to be stereotyped into that innocent, sweet girl persona, that you want the world to realize you are not Hannah Montana anymore. We even get that you're not even the mild-mannered Miley Stewart, the "real world" alter-ego of Montana.

We get it that you are not that teen who sold millions of dollars worth of Hannah Montana merchandise, like t-shirts, pajamas, backpacks, notebooks, jewelry, hair care products, toy microphones, shoes...the list goes on.  I should know, since I purchased much of this with my hard-earned money to satiate my kids' appetite for all things Miley.

So now we parents of 'tweens who were the fanbase for who you WERE must now work to try and discuss with our kids about who you now ARE and what you have apparently come to be. It's not like it's a big deal, really. I mean, you "retired" from Hannah what, 2 years ago? You've pretty much dropped off the radar in the life of a short-attention-spanned childhood and kids simply move on to the "next big thing" just as quick. I think this One Direction thing is the new fad, right? Well, they all but forgot until the VMA's this past Sunday.

If that's what you think will earn you metric tons of more money then by all means twerk away. And thanks for introducing the world to twerking, by the way. I had no idea what it was until this stunt. I shall add it to my lexicon and use it daily in talking to my friends, family, and co-workers. Maybe I'll ask random strangers if they've "twerked" lately. That ought to win friends and influence people.

You do realize that had it not been for the media coverage of this ridiculousness that is the VMAs (I think the last time I watched, Eddie Murphy hosted it) I, nor anyone else would have paid any attention to it. Every year we get treated to some outrageous horseshit that gets people to talk about it for all of a couple of days until the next big attention whore grabs the TMZ spotlight. Usually an over-hyped blowhard with a bad hairdo posing as an entertainer has to interrupt an acceptance speech or two female singers box tonsils on stage, but other than that the VMAs are just another award show no one gives two shits about until publicity stunts like this take center stage.

But I digress, you've moved on from all that teenage silliness. It's time to forget about all that money you raped earned from the kids who followed your every move and you've got to go for a new target audience. You're the millennial version of Opie Cunningham and you want the world to talk about you and only you, not Hannah! You've got to keep it "fresh and real" with your peers so you don't sink into...*gasp* irrelevancy!

Not that I'm surprised, really. For several weeks we've been hearing all about how you have a penchant for marijuana, shortened your hair and even changed the color to get away from that infernally red-headed "Hannah" persona. But this past Sunday should have eliminated any doubt that you want to be tied to that child-star personality from here on out. Yes, Miley, WE GET IT ALREADY!

If anything, it took away from hearing about Lady Gaga, or that N-Sync reunion, or whatever the hell Justin Bieber's doing. Or events going on in Syria for that matter.

Just put your tongue back in your mouth already for God's sake.

Email ThisBlogThis!Share to TwitterShare to FacebookShare to Pinterest
Labels: off-topic 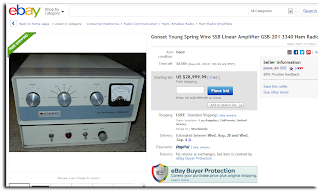 If you act now, you can get your hands on this lovely Gonset GSB-201 linear amp on eBay.

It's clean, looks pretty much to be in working order. It comes from the estate of a ham, so the seller themselves have never used it personally. It has been powered on and the tubes work...or at least they light up. Typical output power can range from ~400W to 1500W depending on mode and the condition of the tubes (according to an article on eHam).

Now hooooold the phone there, you crazy spendthrifts. Let's not rush through this too quick! Let's see what  $29k (minus a penny) could get you:
I'm not sure what medication this guy is on, but it must be awful good. The only answer he gives to all the questions posed are given the same answer. But then again, all of the questions are roughly the same: "Are you nuts?".

If someone actually pays $29k for this, perhaps he's not the crazy one after all.

Could you pass the 1965 Ham License exam?

I was at an estate sale a couple of weeks back and came across a couple of books that got my attention, The Radio Amateur's License Manual and How to Become a Radio Amateur. Unfortunately I didn't get to find out the callsign of whoever it was that had the books.

The license manual covered all of the classes of licenses available at the time: Novice, Technician, General, Conditional (same as General but test taken by mail), Advanced (not available to new applicants), and Extra.


As I scoped out the book, I found some interesting rules that the FCC enforced at the time:

Some rules have obviously changed.

What struck me even more was that many of the questions from the Novice/General/Extra questions were pretty tough. Even with my electronics education and background, it was amazing how intricate many of the questions were. Unlike today's question pools, the 1965 pool did not include multiple choice answers with the wrong answers included, but the exams were multiple choice. It also wanted the reader to draw out certain circuits.

So here are some sample questions in the Novice, General, and Extra class exam pool. See how many you can answer. I'll post the correct answers in 24 hours:

A "typical" request for directions...

I have to wonder if this type of conversation happens on your area's repeaters (the exact conversation and names have been altered to protect the guilty):

Ham1: "Hey guys, I'm from out-of-town and need directions to