How to blow $6 billion on a tech project

Military Intelligence...an oxymoron if ever there was one...

In 1997, the Defense Department began its quest for the perfect family of radios: software-defined radios that, like computers, could be reprogrammed for different missions and could communicate with everything the US military used. Digital signal processing could adaptively use available radio spectrum based on the needs of the moment, turning soldiers, tanks, planes, and ships into nodes of a broadband radio-based network.
The goal was to solve radio problems like this one in Afghanistan, detailed by the Center for Public Integrity in January 2012. Soldiers who watched an ambush forming on a ridge nearby found themselves limited by the hugely variable needs of their many radio systems:

They had short-range models for talking with the reconstruction team; longer-range versions for reaching headquarters 25 miles away; and a backup satellite radio in case the mountains blocked the transmission. An Air Force controller carried his own radio for talking to jet fighters overhead and a separate radio for downloading streaming video from the aircraft. Some of these radios worked only while the troopers were stationary; others were simply too cumbersome to operate on the move.

But the program meant to fix the mess, called the Joint Tactical Radio System (JTRS), instead became a massive 15-year software and hardware development mess of its own, involving five sub-programs and multiple multi-billion dollar contracts. It has been a financial disaster for the DOD. Billions were thrown away on technology that will never see the light of day, despite multiple heroic efforts to pull the project back from the brink of disaster.


Read the full article a the above link.

For decades, pioneer aviator Amelia Earhart was said to have “disappeared” over the Pacific on her quest to circle the globe along a 29,000-mile equatorial route.
Now, new information gives a clearer picture of what happened 75 years ago to Ms. Earhart and her navigator Fred Noonan, where they came down and how they likely survived – for a while, at least – as castaways on a remote island, catching rainwater and eating fish, shellfish, and turtles to survive.
The tale hints at lost opportunities to locate and rescue the pair in the first crucial days after they went down, vital information dismissed as inconsequential or a hoax, the failure to connect important dots regarding physical evidence.
The International Group for Historic Aircraft Recovery (TIGHAR), a non-profit foundation promoting aviation archaeology and historic aircraft preservation, reported new details Friday leading researchers to this conclusion: Earhart and Noonan, low on fuel and unable to find their next scheduled stopping point – Howland Island – radioed their position, then landed on a reef at uninhabited Gardner Island, a small coral atoll now known as Nikumaroro Island.
Using what fuel remained to turn up the engines to recharge the batteries, they continued to radio distress signals for several days until Earhart’s twin-engine Lockheed Electra aircraft was swept off the reef by rising tides and surf. Using equipment not available in 1937 – digitized information management systems, antenna modeling software, and radio wave propagation analysis programs, TIGHAR concluded that 57 of the 120 signals reported at the time are credible, triangulating Earhart’s position to have been Nikumaroro Island.
Read more here.
at June 13, 2012 No comments:

56 years of tornado tracks compiled into the below image:

Click here for more information on the graph.
at June 05, 2012 No comments:

Email ThisBlogThis!Share to TwitterShare to FacebookShare to Pinterest
Labels: tornado

Where are they now?

My first QSO on ham radio should be hitting Altair riiiight about............NOW!

And just think, the first Marconi signals are even farther out than these!
at June 03, 2012 No comments: 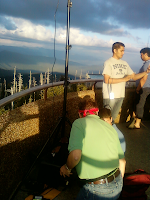 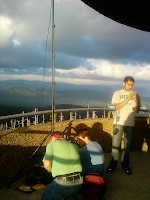