If ever there was a better opportunity to give Radio Shack your opinion of what products they should be carrying, now is the time.
They're looking for input on what would make them a better company, and this is an opportunity for hams to give them input on bringing more products back to "the Shack"
I gave them my opinion. Click here to give them yours.
at May 29, 2011 No comments:

Oh, how I miss Hamvention

12 years ago I attended my last Dayton Hamvention. Every year since then I keep saying I'm going to go back, but something always prevents me from attending.
The 1999 Hamvention was exciting as usual. But 2000 brought me the birth of my daughter Lauren (K4LRN), 2001 was spent preparing for my other daughter's arrival in October. 2002 and 2003 was spent mourning the loss of several member of my family, and the next few years have been spent putting family first, as it should.
But always, the itch was there to return.
Every year I say the same thing, "maybe next year", so maybe, in 2012, I'll once again grace the hallowed halls of Hara Arena. I want to take Lauren so that she can attend the Youth Forum and I might be in the market for another HF rig.
I just hope the sewers don't back up like they did yesterday...
at May 21, 2011 No comments:

How's this for a prime viewing spot of a shuttle launch?

With only two opportunities left to catch a space shuttle launch, getting the perfect spot to view the launch is probably not easy to do. It really isn't easy for ANY launch, but as the shuttle program sunsets, people want to catch one last glimpse of a shuttle launch while they can.
How about this shot:

Taken from an altitude of 64,000 (about twice the height of a passenger jet), this student-launched high-altitude balloon flight caught Endeavour streaking towards space on its final trek to the International Space Station.
As if that wasn't cool enough, speaking of passenger jets, one was en route to Florida and passed by the Cape at the same time Endeavour took off, and a passenger captured this amazing shot:

And there's a video as well...
Atlantis wraps up the space shuttle era in early July, so make plans now if you can!
at May 17, 2011 No comments:

Wouxun Mobile not quite ready 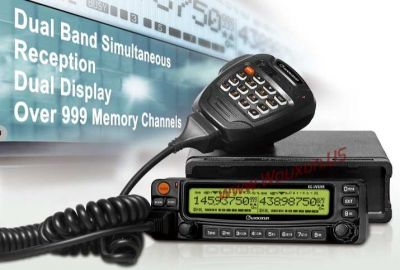 Just when you think the Wouxun (pronounced "O-shing", close to the word "ocean") KV-UV920R dual-band mobile is ready for the big time, the Chinese-built radio has apparently been delayed by the need for further testing.
There was speculation hope that it would be debuted at the Dayton Hamvention (which is next week, by the way) but that does not look to be happening...at least not if the latest update from the Wouxun web site is any indication:

May 1, 2011 Update - Wouxun has not stated a Price or Release Date for this radio. The only information China will pass along right now is "engineers are still testing".

I get about 100 emails per day, which I try to answer as quickly as I can. PLEASE do not send an email asking me when this radio will be ready or what it will cost, I DO NOT KNOW.

If you place your name on the reserve list, you will be notified immediately by email of any news I receive on this radio.

To put your name on the mailing list for updates on when the radio will be made available and the price, click here.
at May 15, 2011 No comments:

The need for SKYWARN

Last month I was heading home and ran into an interesting cloud formation as a powerful wind storm approached Knoxville. Fortunately it was not a tornado, but it was part of a wind storm that did a lot of damage around the area.
Two days later...
The storms that roared through Alabama were some of the largest outbreaks in recent history, with more deaths associated than the famous 1974 "Super Outbreak" in the Ohio Valley.
Check out this video from Tuscaloosa:

The tornado that blew through Tuscaloosa was rated EF-4 on the Enhanced Fujita Scale. Here's the path of that tornado:

Credit Brian Tang and NCAR.
While Tennessee was fortunate to have missed the brunt of this massive tornado, we were no less spared from the tremendous damage inflicted by the storm. 35 people died in Tennessee and 52 tornadoes were confirmed.
I helped man our area SKYWARN net for the first time in many years on a consistent basis. Without going in to too much detail, politics and an ungrateful power-mongering individual with a vendetta on me got in the way of my participating in SKYWARN for 4+ years. However, fate and karma brought me back in (along with many others he alienated) and it has been one heck of a season so far.
Just prior to this outbreak, Knoxville was hammered with flooding and another tornadic storm in recent weeks, the April 27th outbreak was going to put many skills (and nerves) to the ultimate test.
I arrived home Wednesday afternoon and flipped on the Weather Channel to see the monster tornado raging through Birmingham live. Here's the video off of YouTube.
I'd been keeping a mindful eye on the weather most of the day as best I could while at work. When I got home, and saw what was going on in Alabama, I knew we were in for a long night. As I was watching the storms develop, my weather radio went off with one of many warnings to occur that evening. I counted a total of 49 tornado warnings issued by the Morristown National Weather Service for Knoxville and surrounding counties alone.
While Knoxville didn't get tornadoes, we did get hail. Lots of it. Quarter sized hail bombarded parts of west Knoxville and the SKYWARN net I was running at the time was hammered with repeated reports from there. I finally had to tell everyone on the net to stop with the reports from the same area and give me reports from areas east of there so I could tell where the line was...and prepare for the storm to hit my house, mere minutes away. I passed the net control "baton" to another ham and got ready.
My ham station was in the lower part of my house, so I got the kids and animals downstairs and waited for the inevitable. Within 5 minutes of hearing that the quarter-sized hail was in west Knoxville, it was at my home.
Fortunately the brunt of the hail passed south of me, and I only got nickel-sized hail. But it made the tension no less extreme as the storm progressed towards the northeast. The storm would drop an EF-4 tornado down in nearby Greeneville, killing 7 there.
As the night wore on, more and more reports of damage, high winds, hail, wall clouds, and funnel clouds came in. Several tornadoes touched down all over the area, including a bad one in the Chattanooga area.
The Alabama tornadoes, especially Tuscaloosa, overshadowed the death and destruction elsewhere, but the one constant through all of this was the use of SKYWARN spotters all across the southeast.
One of the many great assets of ham radio is the cooperation that the National Weather Service has with ham radio SKYWARN spotters. While anyone can be a SKYWARN spotter (first responders, police, fire, medical, etc) ham radio is typically the only service that has a station (and a volunteer) on site at the weather service.
The more eyes on the storm, the better. The more eyes that become hams, then the communities are a little more safe.
at May 15, 2011 No comments: