It's been a somewhat slow month for me being on the radio. After Lauren got her license things have been quiet.
I talked to her on the way home from work one evening. My friend Jason, KF4VDX jumped in and talked to her briefly, but other than that she's not had time to get on the air. She's doing homework or is at my mom's house, her friend's house, or my sister-in-law's and she's without a radio.
I'm looking to get her an HT as I promised her. I'm looking at a Yaesu or even a Chinese-made radio. I know, that whole thing with China and the economy but dammit if you can pick up a dual-bander for $95, you can't help but take it into consideration...

Another friend of mine lost his wife last month. I went to the receiving and paid my respects. I also found another friend who's been overseeing the SKYWARN activities for the NWS. His name is Ed Bradley, W4VGI. We talked (for the first time in 2+ years in person) and briefly discussed some issues that had occurred over the last 2 years. I won't go into detail, but he did invite me to the Morristown office for SKYWARN Recognition Day on December 5. I said I would look into it and asked him to let me know when he needed operators.

Fast forward to Friday, December 5.
I'm cruising my Facebook early in the evening and see someone post that they were headed to their weather service office for SKYWARN Recognition Day and I uttered a few curse words thinking (as I usually do) it was the next weekend. I got an email from him a couple of weeks before, and not surprising to me I forgot about it.
It had been 3 or 4 years since I participated (from the Morristown office, that is, although I worked a few stations from home one year) and was eager to get back up there. I called on the Morristown repeater to the ham station WX4MRX and found that Ed was there, and asked if he needed help. He eagerly accepted, and I got permission from the Mrs. and headed up to Morristown (an hour's drive from home).

When I arrived a couple of hams were on station and trying to make some contacts. It was a bit nostalgic coming back to the old place. The last time I remembered it, the actual station had 3 radios (Two 2m/440 dual-band Alincos and a 220 radio) and an APRS setup. I was pleased to see it has since been upgraded to include an HF station and additional radios on most VHF bands.
Gone are the two CRTs and in its place is one LCD with a switch to two different PCs, one for APRS, the other for internet. There are 3 Yaesu FT-8800R's for 2m/440 operation, the 220 radio (Alinco DR-235 MKIII), a Mirage B5018G amp, and Icom 718 HF rig with IT-100 Auto-tuner, and various meters and power supplies to keep the radios working. The new setup is off to the lower right, and a layout of the setup is below. 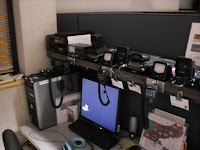 I was amazed at how much the station had changed since I last visited, but it was a pleasant surprise. Not to mention jealousy at the sophistication of the layout. The last thing I want to do is show a pic of my hamshack...
After Ed and I had a talk to catch up on the last couple of years, I got to it, trying to make contacts. I participated in the inaugural event 11 years ago and I had a very active evening, making contacts all over the US and locally. I had a great time and have worked them from Morristown off an on over the years. 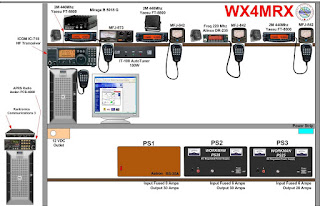 Unfortunately it was not a good night on HF this time around as far as band conditions go. Everything from 10 to 20 meters was dead or dying, and 40 was noisy and polluted with the shortwave stations, and 80 was not active yet (unless you wanted to talk like a CBer on the usual outlets). I started on 20 and worked a few weather service stations, tried a few on 40, and 80 was no luck at all, even as I was wrapping up.

I only contacted about 20 stations on HF. In hindsight, I completely skipped over VHF. I could have hopped on the local repeaters and made some contacts that way (I forgot they were allowed) and completely ignored that fact.

Also, it appeared that Ed may have not submitted WX4MRX as a weather service station until it was too late, several stations were asking why we "weren't on the list".

Like Field Day, I'm thinking ahead to next year. Hopefully I'll be better prepared and I'll try to recruit some additional help for the graveyard shift. I had a couple of guys there for the first couple of hours, but they left and I was by myself until I left the weather service office at about 4am.

It's an interesting event and one I really enjoyed doing. Perhaps if I have enough time in advance I can take the family up to help participate. That would certainly bring out the hermits if they hear a female voice or even more so a kid's voice calling "CQ". Don't worry, I'll be sure to send them home before midnight.
at December 31, 2009 No comments:

Lauren's got a new callsign

Well less than 2 months after my daughter Lauren passed her ham test, she decided that KJ4QNH was not for her. Something about the letter "Q" she didn't care for.

So we applied for and got her a new callsign through the Vanity system.

She is now K4LRN. The suffix "LRN" is short for her name, something she liked when we looked at what callsigns were available.

I checked late Thursday evening and it was still pending, so either yesterday or today it went through.

My Christmas present to you: How to renew your ham license for FREE! *

If you've been licensed for over 10 years, chances are you've received notices from companies offering to renew your license for a "minimal fee".

Well, I'm about to save you some money, because you don't have to pay a dime if you do it yourself*.

All you need to do is to go to the FCC's Universal License System (ULS) site and renew online. 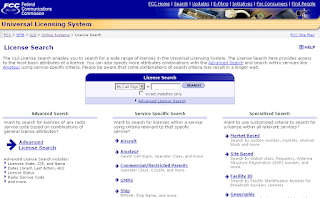 You will need to know your FRN (FCC Registration Number) in order to renew. Don't know it? Don't worry, all you need to do is look it up on the ULS search page.

To search for your FRN:

If you already know your FRN and password, go to the login page, sign on, and wait for me down below. Otherwise, continue on...

Chances are, you've never had to use ULS before, since either you've been a ham for less than 10 years, or renewed it before ULS online renewal was enacted, let someone else do it for you, or you got a new callsign (due to vanity request or license upgrade) and the 10-year term was reset upon the issuance of the new callsign. Therefore when you get back to the ULS sign-on page, click "Register". 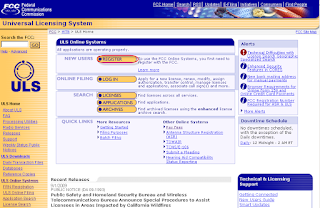 When you get there, you will have 3 options, click "Update" in the middle. 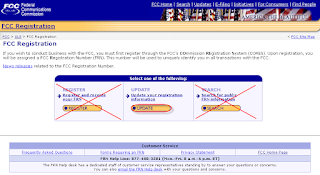 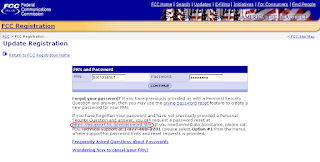 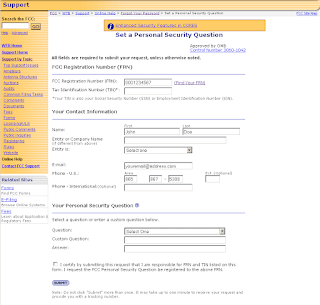 You will need your FRN, enter your contact info, and provide a current email address, then set whatever you want for your Personal Security Question. You can either choose a preset question from the dropdown menu, or set one up that you alone will know.


Again, someone contracted with the FCC will set the question and answer you chose so once again write it down!

Once you have received your email from the FCC that the Personal Security Question has been set up (or you already know it and skipped the previous paragraph) you will need to set your FRN password.
Time to Log in to the ULS

Hopefully you haven't given up hope and are not shilling out $5-10 for someone else to renew your license at this point. We're almost there, I promise!

You've gone through setting up your Personal Security Question and/or password, so now it's time to log in. 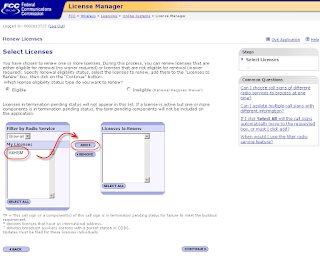 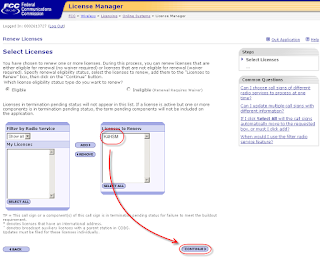 If you have a Vanity call, you will be prompted to pay the fee associated with renewing a Vanity callsign once the renewal application has been successfully received. It will be in a "pending" mode until the Vanity fee is paid. I plan cover that process in a later posting.

And that, my friends, is what they're charging you for. So now, if all has gone through successfully, you will be placed in the queue for renewal. It shouldn't take more than a couple of business days to get updated in the ULS but give it up to 10 business days before attempting to contact the FCC for an update. Check the ULS for your callsign and note the expiration date should now read 10 years from now. You should also receive an email confirmation.

I admit for some this may be too much, but if you stuck with it this far, you hopefully saved a bit of money. If not, then you're not out an incredible amount of money if you let someone else do it for you. But still, why pay someone else to do a job that you should be able to do on your own for free?

I'd love to hear from anyone who followed these directions and get some feedback one way or the other. Also, if you could proved additional screenshots (especially if you have to renew your Vanity) I would appreciate it, as I never thought to grab screen captures while renewing mine, but then again, this idea didn't occur to me until after the fact. If you have a sequential callsign that's due for renewal, I can try to help if possible. My email is gregk4hsm at gmail dot com.
at December 22, 2009 No comments:

Today I found that Scott Robbins, W4PA was buying Vibroplex and moving the company here to Knoxville.

I met Scott at a RACK meeting several years back. He was working at Ten-Tec and was notorious as a contester (before retiring last year).

He was the guest speaker and gave an example recording showing how he can use two radios simultaneously to make contacts during contests. While tuning with one radio, he's making a contact on another. I don't know what he did for writing down the contacts...
It's good to know that there's some economic boost around here. Even if it's "ancient technology". Wonder if he's hiring?
at December 09, 2009 No comments: