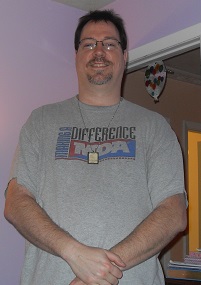 After my unexpected, less-than-friendly departure from the Pigeon Forge Titanic Special Event because of a lack of having my license upon my person, I made a photocopy and laminated it for my wallet (which soooooo many hams were soooooo polite to inform me of what a wallet-sized ham license looks like) so that this issue, should it ever occur again, will not prevent me from operating.

But I couldn't stop there. I needed to go deeper into being the smartass I can be.

I needed to make my license readily available so that I didn't have to go through the painstaking burden of reaching into my back pocket and pulling out the license. I needed something even more convenient.

A coworker of mine has been making pendants using parts from a hobby store and clear acrylic, and one morning while we were talking about his latest creation (a OUIJA board) it dawned on me to have him attempt to do the same thing with my ham radio license. I obtained the parts needed, mainly the pendant, and he began work on the project. I sent him a scanned copy of my license and he was able to reduce it down to the dimensions of the pendant.

Once he had it reduced, he took it to Walmart and had it printed on photo-quality paper. After snipping it down further, he positioned it and poured the acrylic atop it.

After a couple of days to set, he brought it in Wednesday morning me to look over. I couldn't be happier with it.

So now I not only have my official wallet-sized license to whip out on demand, I can also brandish this new piece of "bling" to amaze and impress. The wife and daughter like it and I'm going to have their licenses made into this as well. Amber, the little one, she wants one, too, and she's studying up already.

So next time before you ask me for my ham license, look around my neck for this new piece of hardware!

The next step? maybe something along the lines of Flavor Flav and his giant clock, perhaps?  YEEEEEEAAAAAHHH boyeeeeee!

And by the way, if you're interested in getting one of these using your license, let me know.
at May 02, 2013