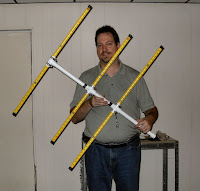 I've never been much of a "do-it-yourself" kind of person. Usually I buy whatever it is I need pre-fabricated, or have someone help me out (which basically employs my standing around getting tools and/or coffee for whomever is doing the actual work) after I buy the parts.
Take my 6m dipole for instance. I had it made for me by my friend Tim, KE4OTZ. Once I saw how simple it was, I sat there wondering why in the hell I didn't just do it myself...but that's the way I am, just too intimidated to try it thinking I'm going to set my equipment on fire if I do try to do it on my own. And chances are, I would...

When it comes to antennas, I just never felt like I was confident enough to do it properly. But last week I was shown a unique type of antenna that can be built with PVC tubing, tape measure tape, and hose clamps. And that made me think, to borrow a tired cliche, that if *I* could do it...

What was even more of an amazing coincidence was that when I talked to a ham friend of mine I work with (John, KD4DLU) he told me he made one of these himself and loved it. So, later that evening after work he and I met up and he showed it to me and let me borrow it for the weekend.

Within a few moments of looking at it, I knew this was an antenna I wanted to build, and I wanted to do it myself!

And not only did I do it myself, I did it fast, too. This could be constructed in less than 2 hours, and that's with a trip to the hardware store to get what you need.

So, last Sunday afternoon I went to the store and picked up the PVC connectors I needed, (I already had the right size PVC pipe from a previous project) along with the metal hose clamps and the tape measure. I bought the cheapest 25' roll they had, which was just under $5. I didn't need anything fancy, since the only thing I needed after all was the metal tape itself. And do make sure it is metal tape measure you are buying.

I got home and the first thing I did was to bring up the project's web page (written by Joe, WB2HOL) and got the measurements of the elements I would need. I extracted all 25+ feet of the tape, cut it using ordinary (but expendable) scissors and set the now-empty cartridge aside (you should hear the spring on one when it tries to reel in an empty roll of tape). I then cut the lengths I needed. In fact, I had so much tape measure left over I can actually make 2 of these antennas or add additional elements if I wanted more improved directionality of the yagi. 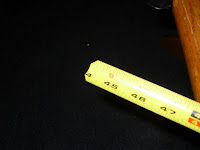 One note about the tape measure components is that they have sharp edges. I trimmed the edges off at the corners (see picture) and then applied electrical tape to the ends in order to prevent the sharp edges from cutting or stabbing me when handling it.

Next, I cut the PVC pipe into the proper lengths and then connected them together. I didn't need glue to hold the PVC fittings together, but it can be used if you prefer. I took the tape measure pieces for the reflector and director elements and connected them with the hose clamps. The bigger part of the project was getting the driven element parts connected to the array.

I had to use sandpaper to get the heavy paint off the tape measure components so that I could solder the coax and the hairpin match to them. Once I did that I warmed up the soldering iron.

While the soldering gun warmed up I searched for some wire for the "U"-shaped hairpin match, and eventually took some old wiring from an old ATX computer tower's power switch and stripped it to the required length for the hairpin match. Then, I took a string of coax from an old Radio Shack mag-mount antenna and cut about 12" off the end. I would later regret this, to be honest, as I should have cut a much longer length.

I then took some solder to the tape measure pieces before attaching them to the antenna structure. This works best so that when you attach the elements to the PVC pipe, you can then solder the coax and hairpin wire quickly without melting into the PVC underneath.

After I connected the driven element segments to the PVC, I wrapped electrical tape around the bend of the "U" shape in order to hold it in place against the PVC and then soldered the hairpin wire to the tape measure. It was very easy, almost too easy, really. In order to set the proper 3/4" distance between the leads, I took a scrap piece of tape measure cut to 3/4" and used it as a spacer. this was discarded once I had the correct distance between the two driven elements.

I then took the shielding off the RG-58 coax and then twisted it together, then tinned the shielding in advance and then soldered it to the tape measure mounted on the PVC. It was less than 3 seconds for the solder to melt enough for the wire to penetrate. Same with the center conductor. I even applied more solder afterward with no melting of the PVC pipe. The hairpin wire did not move when the solder melted around it as I applied the coax connector.

I plan to use it for a foxhunting project that the University of Tennessee Amateur Radio Club is putting together in October.

Again, I think I'm going to re-do the coax connector to make the cable much longer than the one I have on there now. Other than that I couldn't be more pleased with myself. In fact, I'm actually thinking of making one of these with more elements in order to narrow the beamwidth down even more, and use on a field day or mountaintop journey.

If you had to buy all the parts, you should not be out more than $25 at the most, I would think. Since I had the PVC pipe already, that trimmed the expense a tad. The most expensive part was the 10-pack of hose clamps, at just under $9. Zip ties or self-tapping screws can also work if you're on a tight budget. I recommend the hose clamps on the driven element at the very least in order to keep the element in place more securely.

Below are some additional pictures if you are so bold to try and take on such an intriguing endeavor. It's certainly an easy project that anyone can do and will not take all day or all your money to invest in the effort. It's a guaranteed confidence-builder.

Here are some additional pictures: 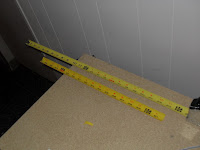 This is a shot of my measuring out one of the lengths for the two driven elements to be installed in the center.

Use sandpaper to strip the paint off the tape measure for the center radiators to ensure a good connection with the coax and the "U"-shaped hairpin match. 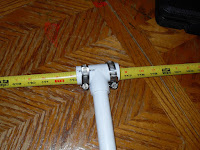 The hose clamps connected to the D1 driven element. Tie wraps can also be used or perhaps even electrical tape, but they will wear out over time. Self-tapping screws are also a possibility. 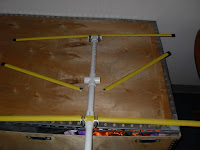 Preparing to mount onto the PVC fitting and solder the coax and hairpin match to the center elements.

The "U"-shaped hairpin match is soldered on. I used electrical tape to hold it against the PVC, which helped during soldering of both it and the coax. I took off the tape to show the match, but it can be left on to keep from getting it caught on anything. 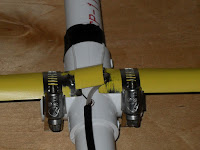 To measure the correct 3/4 distance between the hairpin match wires on either side, I simply took a 3/4 inch piece of scrapped tape measure and used it as a spacer between the two leads. This does NOT get attached to the antenna, it is thrown away afterward.