Two new hams in my family?

On the way home from visiting family, I talked to my daughters (ages 8 and 6) and asked them "so, would you like to learn how to be a ham operator?" and enthusiastically, both answered "yes" repeatedly until I told them I got it. 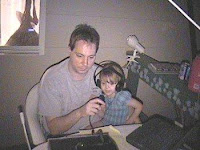 It made me feel good to know they were both interested. Already, I'm thinking about those applications to the ARRL for scholarships in 10 years...better keep my membership current!!!

It's not too terribly surprising, really, at least for the older of the two. Lauren's been listening to me talk on the radio during Field Day (the above picture was taken when she was two), launch balloons, and even read off a weather warning during a recent SKYWARN net. 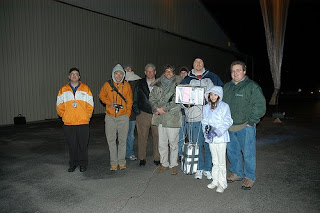 I'm glad this is one thing that runs in the family. Not just my wife and I, but my wife's youngest sister also had her license at age 13. Supposedly my father-in-law had one but he was more into CB than ham radio, mainly because he didn't like power limitations...

Some friends of ours from Bristol, TN have a son who go his ticket about a year or so ago. He's active in their SKYWARN group and likes it thus far.

So now I have at least one who's looking to get ticketed soon, my other one, Amber, I'm not so sure of, at least not yet. Granted, if she got her license it would be big news around here since she's 6 (7 in a couple of weeks) and to have both of them licensed might turn a few heads. Question is, how do I teach them, and how will they administer the exam?

I'll probably start online and look over the sample questions, then talk with them about what this means, or what that indicates, or how something works, etc. Then we'll see if they're still interested. Between Brownie Scouts, school and the possibility I may become a soccer mom before too long, I don't know if I'll keep their attention long enough to get their ham tickets.

I know that the VEs can administer an oral exam, which they'll have to do for Amber since she's not reading at that level yet, and probably give one to Lauren. Even though she's an excellent reader, she sometimes has issues with the comprehension, and I don't want her to just memorize the questions and answers, I want them to understand why something works this way or that.

Like all things around here, time will tell if I succeed or not. If I do, George will have the exclusive on that story...